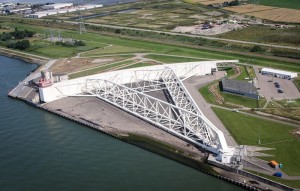 Maeslantkering – Storm Barrier (One side)

We headed to Den Haag & Rotterdam today just to go there and to check out a few things. We slept in and relaxed a bit this morning first. Before leaving, we hit the local grocery store to pick up a few thing Pamela wants to take home.

First to Den Haag. This is where the Dutch Government and Parliament are along with the Supream Court, Council of State and home to the Royal family. The International Court of Justice and International Criminal Court are also located here. We did not go to see any of these; we headed to Madurodam. On the way we took an early exit to check out some of the big fancy homes in the area. There is a lot of money here.

Madurodam is a park with miniatures of many of the major buildings and areas in The Netherlands. If you can’t go everywhere to see the real thing, this is he next best option. The detail in some of these are quite remarkable. I think we might have been the only ones there without kids. At least we had Sophie. We toured around for about an hour and a half before moving on.

Next was Rotterdam. This trip was basically to go see Maeslantkering; the big storm surge barrier. This 2 part gate is one of the largest moving structures on earth. These gates are 22 meters high and 210 meters long….all steel. The cost to make the barrier was about 450 million Euro. (660 million Canadian dollars). The arms of the gates standing on end would be as high as the Eiffle Tower in Paris but weigh twice as much…EACH. The ball joints used are the worlds largest and are 10 meters in diameter and 680 tons each. This has got to be the most amazing engineering project I have ever seen. In the second picture of the barrier below you can see a full sided barge between to give you the idea of the scale of these gates.

WE ended up skipping lunch (not on purpose) and were starving. As we headed bat to Aalsmeer, we stopped at a place called Balley’s in Rijswijk. Pasta and spare ribs we on the menu, but just coffee and cola this time. The food was excellent. Pamela even want back and let the cook know. 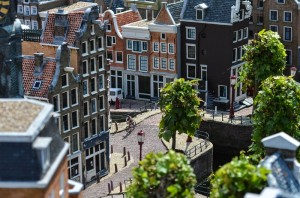 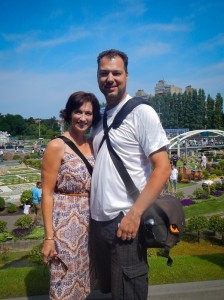 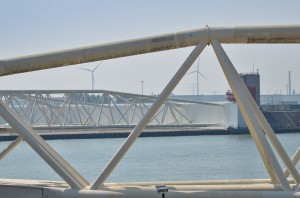 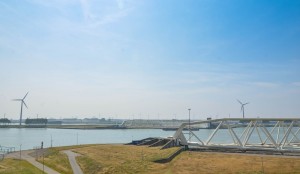 Posted under Europe 2014 and tagged with Bally's, barrier, Den Haag, Madurodam, Maeslantkering, Rotterdam
Comments Off on Little to Big…..VERY BIG.