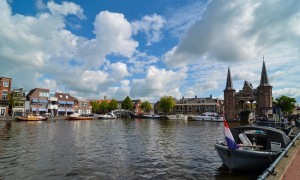 Well we finally found a hotel in Sneek (pronounced…..Snake) around 8pm. So tired that at this point we didn’t care what we got. It was a much older Hotel right in the city center on Sneek. We got the last room which was on the third floor….and no elevator!! That’s right….we lugged the bags up 3 floors to the room only to find it very hot. Did I mention most places here in the Netherlands do not have AC. Thankfully there was a fan in the room, only the second one I have seen while here. We had a quick bite to eat and headed to bed.

The next morning we toured around Sneek for a couple of hours. The best way to describe it as a mini Amsterdam. It is a beautiful city with the canals and the shops laid out very similar to Amsterdam that is only 126 km away. We had a coffee at one of the many coffee shops there. I have drank more latte macchiato’s in the past 3 weeks here then I have in the last year at home. I definitely see a diet in my near future…  🙁  It’s either that or basically a shot of espresso as your coffee. I prefer to drink more then an ounce of coffee in the morning.

Sneek is also in the province of  Friesland. It’s a province of the Netherlands but with a different dialect in the language…..basically like Quebec back home. The attraction there is the Afsluitdijk Crossway. It connects Friesland to Northern Holland. It was constructed from 1927 – 1933 and is 32km long. They basically added land there so they could build a road and cut off the North Sea to gain more area. The water that they cut off from the North Sea is almost 100% fresh water now.  We stopped at the half way mark  to take a few pictures and use the wash room at the cafe. We had to buy something before we could use the toilette…… 🙁   $5.90 Euros later ($9.00 Canadian) for two cans of iced tea and we got a ticket to use the bathroom. Wow….they were making lots of money there!! I probably could have waited but that morning latte was hitting me.

Next stop….Ray’s cousin (on his mom’s side) Dennis and his wife Kitty. We had lunch with them …..bread with peanut butter and chocolate sprinkles was my choice. Chocolate sprinkles on bread is a big thing here. I introduced them the peanut butter and chocolate. There is no such thing as Reese Peanut Butter Cups here so they don’t get that they really go together well. Weird!! Aunt Mariejanne and Arie came by to see us too. It has been about 14 year since Ray has seen them when they came to Canada so it was a great visit. It has been great to finally meet Rays family. I have most of them on Face Book but it is great to finally meet them in person. All very special people.

Ray has been telling me for year about his last trip to Volendam. So that was one of the stops we wanted to make. We went there next….about 20 minutes away. It is a sea side village that caters to the tourists. Lots of boats in the marina and many shops, restaurants and souvenir shops to go through all along the board walk. First thing we did was go the the same shop that Ray had been to when he was 9 years old and with his family. We went to  get our picture taken in the traditional dress like in the olden days. (The picture below is just the cell phone picture…not the professional one we got.) It was fun but extremely HOT in that costume. We walked the whole way through checking out the shops and even stopping for a drink at one of the cafe’s.

Finally it was time to return to our starting point on this trip, Ferlin’s place in Aalsmeer (10 min from Amsterdam). We can relax for a few days before flying home. When I say relax that means…..checking out the local mall, Check! Going to Rotterdam, checking out the Gay Pride Parade on Saturday in Amsterdam, doing a canal tour with Ray’s cousins and families on Sunday, BBQ’s and family dinners. Relaxing…..  🙂

Time to have a wine….Cheers! 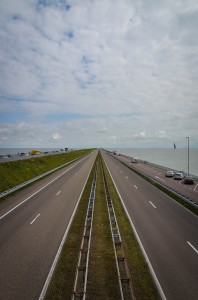 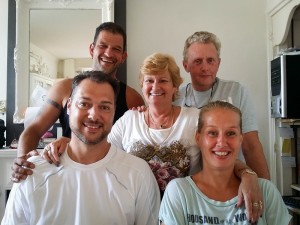 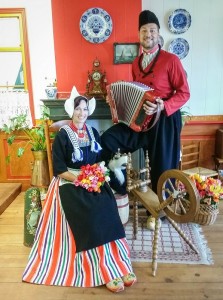 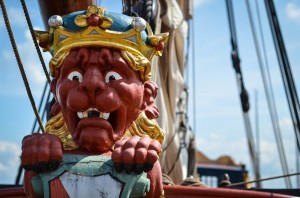 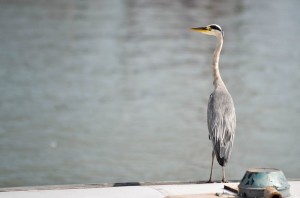 Posted under Europe 2014 and tagged with Afsluitdijk, Dike, Friesland, Nunes, Sneek, Volendam
Comments Off on Sneeking around Holland