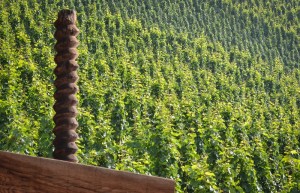 Urzig, Germany was an amazing find to say the least. Finding a hotel in a small village that speaks little to no English was a challenge. I ran into a local pub to ask directions and muddled my way through the bar tenders directions. Little did we know it was just around the next corner. The streets were very narrow but beautiful.We were woken up at 7 am, not by an alarm but by a 5 minute long ringing of the church bell just down the street. Later, I watched an elderly lady walk out your front door and down the cobble stone streets off to church service I presume as it was Sunday morning. Our hotel door was in the same alley as her home. We drove a bit and took some pictures of the vineyards before leaving back up the very windy road out of the village towards Cologne.

Our next stop was Nurburg. Best known for the race track that completely surrounds the city. You can drive on it with your car or at special times of the year rent race cars and drive them which is called Nurburgring. It also has many cyclists and motorcycles that use the track as well, which we saw a lot of. Nurgurg is also home of a medieval castle of the same name. That’s where I wanted to go. Off to de Nurburg Castle in the High Eifel. It was first mentioned in the records in 1166 as Noureberg but it is probable that it was already used as a signal station in Roman times to protect the important Roman road that ran through the Eifel. We enjoyed our walk to the tower and looking over the town and the race track around. Once down from the castle we stopped in at the Zur Nurgurg Cafe which was where we parked our car. It was a very race car oriented cafe. We went in to actually see if they had WiFi (pronounced WeFe in Germany and the Netherlands) as we didn’t have any in Urzig the night before. Needed to catch up on face book you know…. 😉 They did and the owner gave us the password…..which I presume he doesn’t give to everyone. We ended up buying some cool drinks and sharing the Giant Burger and fries. Yes, we shared…..it was that big! YUM!
I have come to realize that like the USA….everything is bigger in Germany. The wine you get in a glass is twice as much, the beer glasses are bigger and the food portions are much bigger then any other country we have been. There is a noticeable difference. Bigger bang for your Euro for sure!

We were on to the next adventure…..:) I thought we were headed to Cologne (Koln) but Ray surprised me and he took me to the Augustusburg Palace in Brühl, The palace was built at the beginning of the 18th century by the Archbishop-Elector of Cologne, Clemens August of Bavaria of the Wittelsbach family. We took a 1 hour tour for a small fee of $7 euros each. They included head phones and a recorded tour for us in English as the tour guide only spoke German. I think they received much more info then we did. It was an amazing building about 50% restored. The palace has little furniture because most of it had been sold to pay the debts of Clemens August after his death. The rest just disappeared. The hugh gardens and grounds around the palace were beautiful as well.

OK….now off to Cologne. We arrived at our hotel at approx. 4:30 pm. The first thing we did was hit the local Brew Pub……suggested by the man at the check in desk as a local favorite for dinner. We walked a few minute to the Sunner Keller Brewhouse & Beer Garden. An outdoor beer garden basically with umbrellas and picnic tables. Kids allowed……lots of the running around. They even had a play area for the kids. Excellent food I must say….:) As I said before …..big portions! We called it a night and went back to the hotel pretty early to relax and get ready for the 7am wake up call to start all over again.

Started with a great continental breakfast at the hotel and a short walk to the train station to go to the city center to see the great Cologne Cathedral. Construction of Cologne Cathedral started in 1248 and was halted in 1473, leaving it unfinished. Work restarted in the 19th century and was completed, to the original plan, in 1880. It is 144.5 metres (474 ft) long, 86.5 m (284 ft) wide and its towers are approximately 157 m (515 ft) tall. The cathedral is the largest Gothic church in Northern Europe and has the second-tallest spires. It’s two huge spires give it the largest facade of any church in the world. Cologne’s medieval builders had planned a grand structure to house the reliquary of the Three Kings and fit its role as a place of worship for the Holy Roman Emperor. Simply amazing, what more can I say. It was very big and very beautiful. So much to look at. There was so much detail put into every statue and carving……not to mention all the stain glass windows. A quick train ride back to the hotel and we are off to Arnhem, Netherlands.

A quick two hour drive from Cologne to Arnhem turned into about a 4 hour trip. Another pit stop at a Castle.
Kasteel Huis Bergh. It was closed… 🙁 Mondays are a day that most shops here are closed. Its like their Sunday and we didn’t take that into account. Oh well……there is always another castle. A rain storm passing through the area almost got us soaked as we walked back to the car but we made it just in time. Wow……did it rain! Must have caused an accident on the highway (the other side) because the traffic was stopped dead for over 5 km…..not moving, people all out of the vehicles walking about. Not moving at all. Thank goodness we were going in the opposite direction.
Checked in to another fine hotel here in Arnhem and went to the city centre for dinner. Yes….another pub. It’s just easier…. 🙂 Looking forward to sleeping past 7 am tomorrow.

There…the blog is all caught up. Good night from Holland. 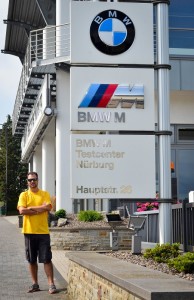 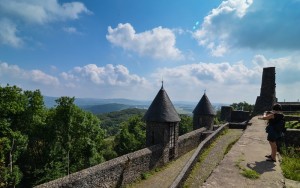 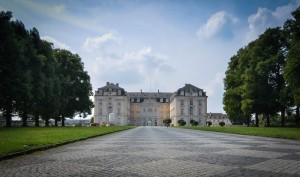 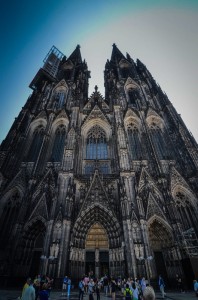 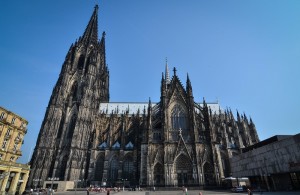 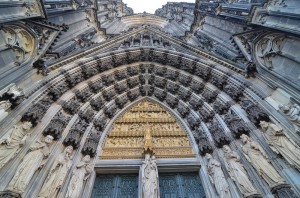