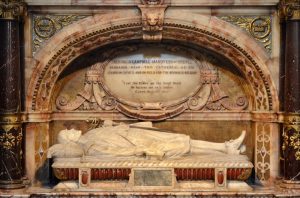 The Royal Mile: Today we worked our way down, and part way back up, the Royal Mile. The Road basically goes to Holyrood House to Edinburgh Castle, filled with shops, tourist traps, restaurants, pubs, scotch, a close almost every 20 feet, and a lot of people. We started by ‘playing dress-up’ for a photo shoot we booked yesterday. Me in Stewart garb…hmmm, but I did get Pamela into Dutch costume when in the Netherlands. (Pictures to come later.) The shop was also a tartan weaver so there was a bunch of that there as well as shortbread, swords, bagpipes, books, blah blah blah. Heading down the road we checked out some more stores and scotch shops.

Not far down we stopped for a light lunch at a place called The Jolly Judge, a small pub down a close we spotted earlier. Soup and a sandwich is just what we needed. Defiantly a place to hit if you get a chance but they don’t open until noon.

We continued on taking pictures, visiting a church, a market, and more shops. There is only so much we can say about shopping. Did I mention we it another pub near the end? Ah-ha…we had coffee. Afterwards we went next-door because Pamela wanted a few scones to go from the tea house there. They were pretty damn good. Being so close to Holyrood House again, we knew exactly where to catch the tour bus, but as we stood waiting, Pamela spotted some kind of half-glove thingys (that’s the technical term) a woman had on and ask where to get them. So back up the road we walked to find these “wrist socks”. Next….the hat shop.

This is a shop we went to the second day we were here. Pamela got her hat and I got myself another flat cap. Being right in the middle of Harry Potter land, we made a few stops to take a look even though I know nothing about it. The grave of Tom Riddell Greyfriar’s Cemetery then The Elephant House after dinner. Dinner was at The Frankenstein Pub which was a catchy place that seems to fill up quick when the pub games are on. This is not your small pub mind you, three floors here. Pamela went with something light and myself with the Monster Burger. This thing is huge! Bacon, chicken, pork, cheese, onion rings, and more on a bun, with a side of fries. I washed it down with an Edinburgh Castle Ale before we head to the room for the night.

A short trip planned for tomorrow but you’ll find out about that later. 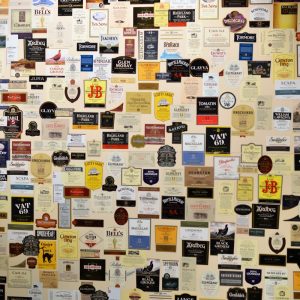 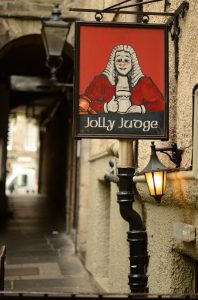 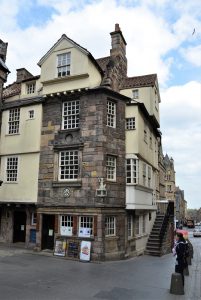 On the Royal Mile 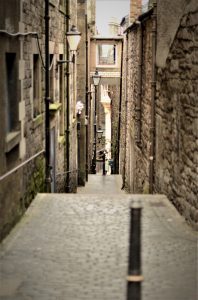 One of many Closes’ 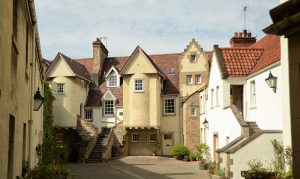 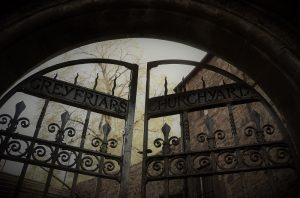 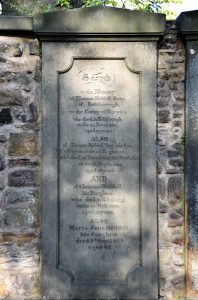 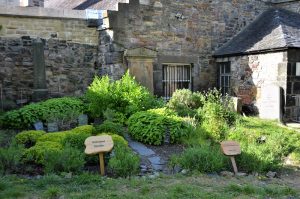 Posted under Ireland & The UK 2017 and tagged with Edinburgh, Greyfriar, Harry Potter, Royal Mile, Tom Riddell
Comments Off on Walkin’ The Mile